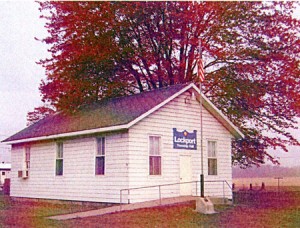 Lockport Township, originally was much larger than at present, was organized in 1829, later re-organized in 1833 and has been re-organized as we find it today. In general it was like the other townships of St. Joe county being well drained containing prairie land covered with light timber of the Burr Oak variety, level except as it became rolling and heavy timbered near the rivers. Its soil was the usual sandy loam. It did have one noticeable difference from the other townships-it has very little swamp land. It contains several lakes and four rivers-they are: St. Joseph, Portage, Rocky and Hog Creek (now called Prairie) rivers. They all join the St. Joe in Lockport township-three meeting at the city of Three Rivers.

In 1828, Jacob Mcinterfer of Wayne county, Ohio, came here and selected a mile square section of land west of the Rocky River. He brought his wife and seven children here in the spring of 1829. The Rowens, Armstrong and Davis families, neighbors from Ohio accompanied him. Later, the three families settled around Mottville. The Mcinterfer family lived in their wagons and a makeshift shanty until their log cabin was completed in the summer. He had a power site on his land and started to build a mill but was overtaken by death in 1831 and his mill was bought and finished by Mishael Beadle. Mcinterfer’s death was the first in the township, his funeral services were the first religious services. The first birth and death of a child, was Mcinterfer’s granddaughter, the daughter of Solomon Mcinterfer. The first marriages in the community were the daughters of Mcinterfer. Mary was married to David Winchill in November, 1830, and Sarah married William Macintosh, the same year. The first school was held in Mcinterfer’s log cabin which was the first log cabin built. “Father” Arney was the school teacher. Mcinterfer was the first white man to till the soil and sow crops. George Buck and family were the next settlers to locate here, coming in 1830. He built a double log house in the 2nd Ward of the present city of Three Rivers. It was the first Tavern. It was the center of all social and political gatherings for several years. The first convention was held here and it is related Mrs. Buck, unassisted prepared the dinner for 75 people. Geo. Buck was the 2nd man to farm in this locality was the 1st postmaster for years and planted the first apple orchard.

Chas. B. Fitch, afterwards Judge of Circuit Court, was the next family head to locate here. He had several hundred acres in section 31 just south of Three Rivers. After living a year in White Pigeon he selected this land because of a power site on Hog Creek. Several of these families still live in the county.

Mishael Beadle arrived in 1831 and located on the west side of the Rocky River. He bought and finished the Mcinterfer mill which was dropped at Mcinterfer’s death. Mr. Beadle built the first two frame houses.

John Leland erected a saw-mill on his land and later introduced the first improved farm machinery. He made some improvements on the machinery and, being a good mechanic, started to use the power in his mill to manufacture reapers and threshing machines. His mill was the first to be run by “friction” drives instead of cog wheels. The largest Red Cedar tree in Michigan was found on his land being almost four feet in diameter and was taken to the Centennial Exhibition. In later years he built a fine, large home that is still standing below the site of the Sturgis Dam.

Mint raising was started in 1848 and eventually the Wolf brothers became the largest raisers of it, wormwood and spearmint.

Pure bred stock raising did not start until 1860. First land entries were made in 1829. John Hoffman planted the first peach orchard in 1833 and Wm Arney planted a large orchard the following year. The first road was laid out by Mathew Rowman in June 1833, from White Pigeon to north side of Lockport Township.

Harvey Hunt of Constantine operated the first stage coach and mail route from White Pigeon through Lockport Township to Bronson (now Kalamazoo). The first brick house in the township was built by John Young.

The present city covers three plats. The first plat was made by Christopher Sinnaman in July, 1830 and called “Moab.” It was located in the 3rd Ward of the present city. The second plat was made by Geo. Buck and Jacob Mcinterfer in June 1831, called “St. Joseph” and was located where the 2nd Ward is today. Great things were anticipated for both of these villages. Concessions were made to the county to have the court house located here and it was decided to build it here. Later it was reconsidered and as Centreville offered more liberal inducements it was built there. In December 1836, five pioneers, including Geo. Buck, platted the village of “Lockport.” It was located in the south part of the present city and is still called Lockport by some of the old-timers. An immense power project was planned there and stock was sold and a canal and other work started but the panic of 1837 broke most of the “backers” and it was forgotten. In Nov. 1836, the Hon. John H. Bowman platted out a village and called it Three Rivers. It was located in the Ist Ward. It grew and thrived. In 1871 the city extended its corporate limits to take in Lockport as the 2nd Ward, “Canada” as 3rd Ward, located west of Rocky and east of the Portage and between St. Joseph rivers as the 4th Ward. The village of Three Rivers being the 1st Ward. John H. Bowman was the first settler on the old village site but Jacob Mcinterfer and Geo. Buck were settlers on the site of the city as it is now.

In the summer of 1834 there were only six families living in Three Rivers, Burroughs Moore, Mr.Dawleys, Weatherbee, Bowman, Lewis Frost and John Leland. Only three of these had houses. The Bowman and Leland families lived in wagons and the Frost family had a “rough” shanty. Burroughs Moore built the first frame house in the village, and operated it as a Tavern later. Some of the first arrivals in Three Rivers were: Elisha and Thomas Millard, Jos. A. Smith, Wm. R. Eck, Joseph Sterling, C. B. Hoffman, Ezra Cole, and M. Seydle. In the manufacturing line there were several blacksmith shops, grist-mills, saw-mills, woolen, carding and cloth factory, manufacture of corn shelters, two carriage makers, wagon factory, distillery, factory making axe-handles and wheel spokes, two paper mills, brick kiln, soap factory, two pump factories and a plow works, the “Invincible Vibrating Threshers” and Cultivators, two cigar makers, and a manufacture of hats for men. Among the first merchants were Smith & Bowman (located on the present site of the Three Rivers House), J. & B. Eddy, Moseley, J. Gregory (tailor), Dr. E. A. Eagery, Moore & Prutzman, were all early pioneers. Moore and Carlton each built hotels, Washington Gascon, made “keel-boats” in 1836-7, B. Moore designed the first “ark” boats and E. Millard built them, first boat “Kitty Kiddungo” carried flour to Chicago. Moore & Prutzman built their own boats and shipped grain and flour to Chicago. Lumber for the boats were “whip-sawed.” Two railroads were eventually built; the Michigan Air Line was built to the Indiana state line and a branch through Schoolcraft, Kalamazoo to Grand Rapids. The first rails were wood with strap iron nailed on top. The all iron T-rails were eventually laid making it modern and permitting trains to travel at the terrific (?) speed of 30 miles per hour. The first bank was formed in 1864 and the second in 1872.

Mr. Lyon and Mr. Hewitt were the first attorneys. The first school house built was of logs, 24x3O feet in size, located in Lockport in 1837. It had 46 students and a library. An old French Trading Post stood near the LaSalle city park. It was operated by Cassaway and Lewis Gibson. A Presbyterian, Baptist, Lutheran, and Methodist churches were built. The Masonic, Odd Fellows and Patrons of Husbandry lodges were formed. In the early days Arney’s Silver Cornet band was a real musical organization. The Magnetic Springs Sanitarium was a busy institution operated by Mr.Silliman. The building is still standing near the St. Joe River and center of the city. Riverside cemetery was laid out in 1858. The first cemeteries were the old Bowman and Oak Dale. The civil war record of Three Rivers was very good.

The site of Three Rivers is rich in Indian legends, telling about the early Indian wars between different tribes for the location, early French trading posts, the bitter fights and law suits between the three early villages.